Weekends of Premier League and NFL football have returned and boy does it feel good. Of course, with only one matchday down, what else can we do other than make snap judgements about teams that only got a month and a half of an offseason/preseason. If any of these takes down below turn out to be wrong just know I said they were overreactions from the start so I cannot be held liable. Let’s get into it!

It’s become a cliche to even say at this point, but imagine telling a football fan after the 2014 World Cup that James Rodriguez would be playing for Everton in 6 years and Carlo Ancelotti would be his manager. I don’t know how the best clubs in the world allowed James to find his way to Everton, but boy are they glad he did. There was this narrative that James had magically lost all the ability to play football even though he was one of Bayern’s best players in their Champions League run just two years ago. It was clear to anyone who watched the Colombian play in 2018, he was still a talented player and an elite playmaker. Everton has searched for a player that can consistently create chances from an advanced position for years, even spending nearly 50 million pounds on Gyfli Sigurdsson to fix that issue. There was hope that maybe Tom Davies or Davvy Klassen or even Andre Gomes could be that guy even though it was painfully obvious that none of them could. James Rodriguez proved Sunday he can be that guy, he played as more of a right-winger sure, but he drifted into great areas time and time again.

His 5 key passes were the most out of anyone in the match and he took 3 shots as well. Richarlison finally has someone to pass him the ball when he’s running in behind and it looks like a match made in heaven. It was only the first match and Tottenham was dreadful, but all of Everton’s new signings looked like they’ll fit perfectly. Abdoulaye Doucure had 4 key passes himself and made some strong, smart defensive actions in centre midfield and Allan was a good protector for a back four that is going to need protecting. Top 6 is seeming like it should be a real objective for Everton this season.

Liverpool’s defence looks shaky again, nothing to worry about or deeper-lying problems?

On the surface, Liverpool allowing 3 goals to a newly promoted side at home is a worrying sign about a defence that also conceded 12 goals in the last 9 games of the 19/20 season. But, if you look solely at the Leeds game and dive a little deeper, you’ll see it wasn’t actually that poor. Leeds only had 3 shots on target and according to Understat, only had an xG of .27. 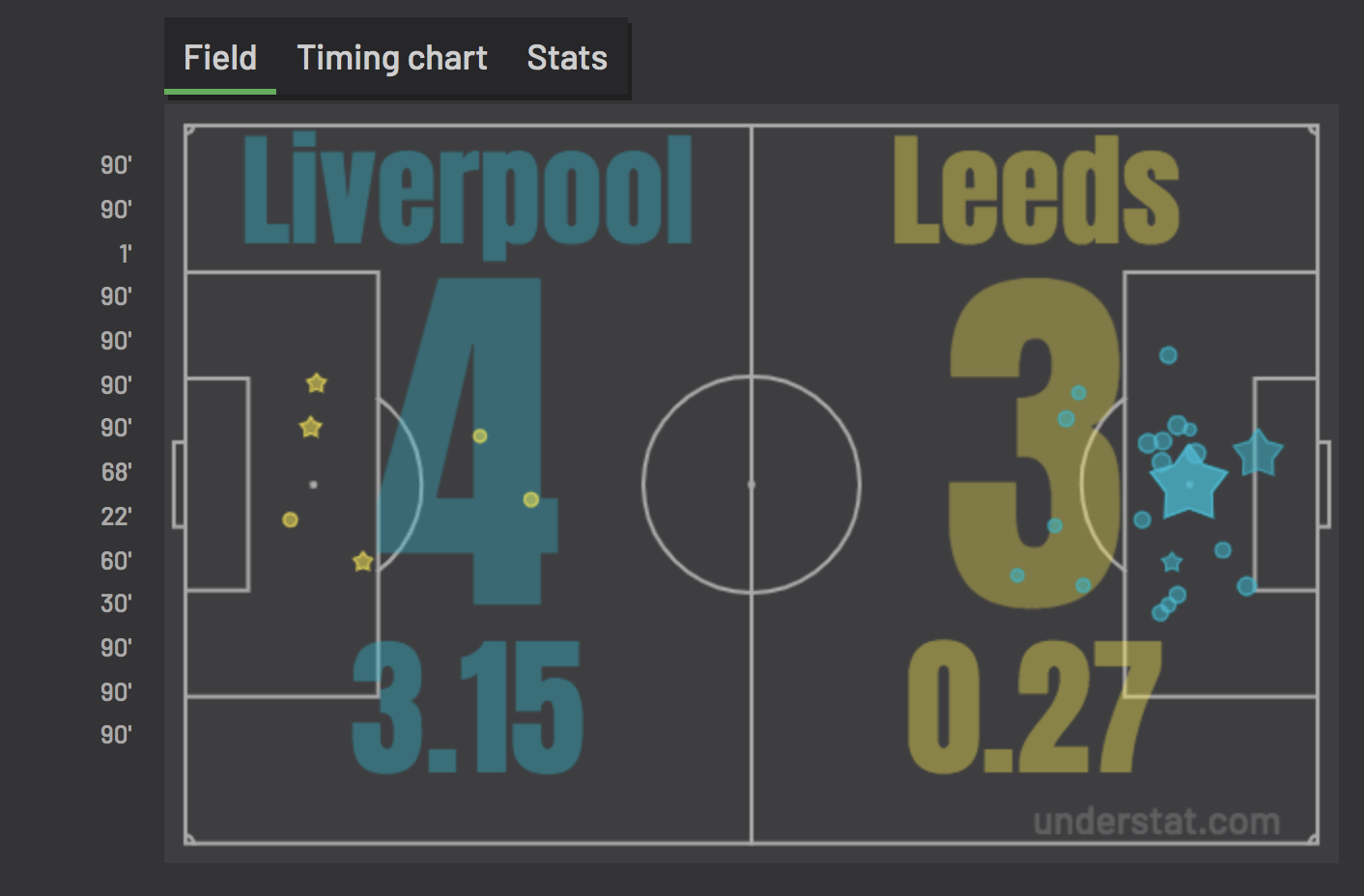 Now if we go into each goal, I think we’ll get a better understanding of what really happened with Liverpool’s defence on Saturday.

Here’s the first goal, sorry for the quality, direct all hate to IF26L on Twitter, but it starts with a long ball over the top, which has been an issue for Liverpool in the last couple years as they’ve played a very aggressive, high line. TAA then does a poor job of containing Harrison and that’s been a problem for him throughout his career, Gomez then makes a rash decision and gets beat and it results in a brilliant finish at Alisson’s near post. Is it great defending? No, not by any means, but first game of the season, I can understand some poor decision making from Gomez who is usually much smarter and you have to give credit to Harrison for an incredible all-around effort. The second goal doesn’t even need to be shown, it’s a brutal error form Van Dijk that happens once in season MAYBE, everyone knows how good Van Dijk is and he just made a mental error, it happens, nothing to spend time analyzing. The third goal, however, is where I can see why some people might be worried about Liverpool’s ability to stay compact and keep the same intensity they’ve had for the last two years.

As Wijnaldum steps up to press the Leeds midfielder, Jones and Fabinho (#17 and #3) should be collapsing and picking up runners into the box. Van Dijk thinks he has protection behind him which is why he is on the top of the box trying to stop the ball from even getting to a danger area. This could be overreaction as the title of the article suggests, but it was too easy for a team as smart as Leeds to score from this situation, one player runs in between all 3 of Liverpool’s midfielders and has a ton of room just inside the area. Credit to Leeds for a lovely goal, but Liverpool needs to tighten up in situations like these or they’ll continue to struggle against teams that are smart offensively. The last thing I’ll say is that Alisson’s form is also a little bit worrying, he’s been pretty poor since his injury and if he gets back to anywhere near where he was in December of 2019 it would help Liverpool’s defence a lot.

Last time Fulham was in the Premier League they got relegated in large part because they signed TOO many players, this time they’ll get relegated because they signed pretty much no one of note. Dennis Odoi is still one of their starting defenders and has seemingly gotten worse, their attack is still devoid of ideas other than giving the ball to Aleksandr Mitrovic in the post and let him back down the opposing centre backs. They had 2 shots on target against an Arsenal team that well improved under Arteta, still is by no means a defensive juggernaut. Arsenal played well, they deserve credit, but it was an absolute walk in the park for Pierre-Emerick Aubamayeng who could pretty much do whatever he wanted. I mean every time he made a run in behind he got the ball in plenty of space, it was actually pretty extraordinary to watch. I don’t think there is a single positive to take from that game for Fulham, I feel like I’m being too harsh, but at the same time, they’re just not good enough to compete in this division, that Joe Bryan goal was cool though.