With the Bundesliga being the first league to return to action after the hiatus due to COVID-19, many football fans were introduced to the best and most exciting young talents the German first division had to offer. The player that I was most impressed by was Hoffenheim’s newest young star, Christoph Baumgartner. Baumgartner made his professional debut for Hoffenheim in the Bundesliga in May of last year after playing in their youth system since 2017. The Austrian has played games at centre forward and out wide, but the majority of his minutes have been spent in his favourite position, the number 10. In his first full Bundesliga season, Baumgartner has 7 goals and 2 assists in 24 appearances and is averaging a goal contribution every 166 minutes. In this article, we are going to be breaking down Baumgartner’s style of play, his tactical abilities and what the future could hold for the 20-year-old.

The reason I start with shooting and finishing is because Baumgartner has demonstrated a variety of skills to put the ball in the back of the net. Baumgartner is not your classic playmaking number 10, in fact, he comes from the Thomas Muller, Kai Havertz mould of goal-scoring attacking midfielders. He can create (as I will get into later), but as the radar and shot chart below shows, his primary goal on the pitch is to find space in and around the eighteen-yard area to get a shot away. 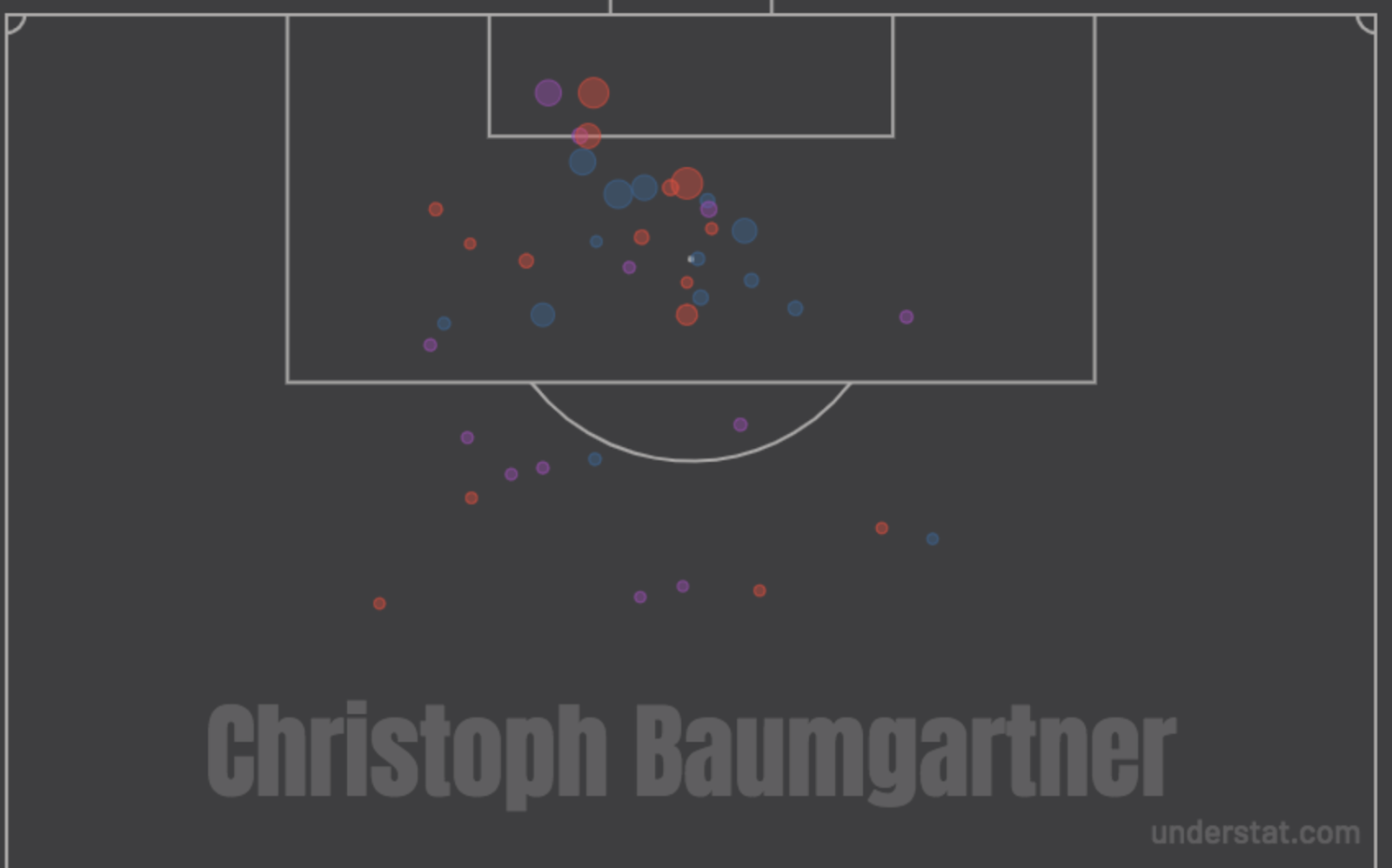 The shot chart above shows all of Baumgartner’s shot attempts that didn’t end up in a goal this season. The radar on the below shows how he has performed this season in comparison to another young, goal-scoring number 10 in Kai Havertz. The soon to be 21-year-old gets in good positions and his .55 non-penalty expected goals per 90 minutes (NPxG90) this season backs that up. He takes around 3.5 shots per 90 minutes (p90) with just over 40% of his strikes being on target. A lot of promising signs, but numbers that can still improve.

Regarding his finishing, Baumgartner is strong with both feet and although he is just 5’10, he scores a surprising amount of headers. Here he is in a match against England’s U-21’s scoring a wonderful header for Austria:

His movement and timing here are so high-level, he has no right to get that ball, but he gets away from defenders into an open area and has the physical capability to leap high enough and finish excellently.

The clip above shows another example of good timing and a solid finish. The defending isn’t great, but that shouldn’t matter, Baumgartner does well to make the late run in the box and he gets rewarded for making the extra effort. The finish isn’t particularly well-aimed, but the power he puts on it makes it near impossible to keep out.

Not much to analyze here, just a fun, audacious goal! (Yes, it did go in.)

Although he is has been at his best plying his trade further forward, Baumgartner has played in central midfield 3 times this season. His radar in the central midfielder position looks like this.

This isn’t a great aesthetic overall, but there are things you can take from the radar that shows he has potential to be an at worst, above-average first and second phase player. He only attempts 30 passes p90 which for a midfielder isn’t a lot, especially when you consider that Hoffenheim averages 52% possession a match. Again remember that he doesn’t usually play midfield, but what intrigues me the most is his dribbling and close control skills. It makes me believe that he could take on more players and complete more dribbles than he already does. When I have watched him play there have been multiple times where he’s picked the ball up around the centre circle, turned away from his defender and driven on into the attacking third. Here is an example of this.

Another thing that surprised me when looking at the radar is how low his ‘Progressive passing distance’ is. Here are multiple clips that show he has the ability to become a really important part of teams’ build-up, which depends on where he plays. The fact that Baumgartner already has the competency and talent to play central midfield and the 10 and play them well shows how much potential he has.

Both passes played here aren’t especially difficult, but he makes them look easy, bypassing multiple defenders in each clip. Another positive to take from these clips is how much he wants the ball, he is coming towards his teammates and giving them an easy option so he can make the more difficult pass. He is just 20, but when you watch him he plays with a maturity that not many players his age have. He can progress the ball from deep by dribbling and passing and having both of those skills isn’t something that should be taken for granted. I think Baumgartner could do both at a high level as he continues to develop, he does also need to create more chances for his teammates, but I think that will come with time too. I should be clear here and say that Baumgartner’s best position right now is attacking midfield or as a centre forward in a two, but I would love to see him play a sort of 8/10 hybrid for Hoffenheim next season.

The biggest surprise to me while watching the young midfielder play and doing the research for this piece was how strong of a presser he is. He has the most pressures in the midfield and the final third for Hoffenheim averaging nearly 19 p90 and he also averages 1.4 tackles won p90 (possession adjusted numbers). He is good at reading the play and his pressing is vigorous, often giving the defender little to no time to make a decision.

Here he senses that the defender will have a tough time controlling the bouncing ball, pounces on his mistake and then well, the finish is just disgustingly good. He knows when the right time to press and to help trackback is and his tackles usually direct the ball back into his team’s possession.

If anything, his defensive ability is important just to show that he can play in a team that presses intensely (ex. RB Leipzig) and not look out of place.

As demonstrated, the young Austrian is as gifted as they come. His first touch is exceptional. I’ve seen him take the ball down from ridiculous heights with ease and he can always put himself in a good position to make a play with his first touch. It’s an underrated ability to be able to make your first touch positive and put it in a spot where the only person who can get it is you, this player can do that. If there is one clip you watch today, let it be this one.

Baumgartner sometimes just glides by his opponents like they aren’t even there, his ball control is so tidy and he has a low centre of gravity that he often draws fouls after making the opposing player look silly. His passing technique is solid, he does need to use his weaker foot more,I think he lacks confidence in his left foot at the moment. As you saw in previous clips, his passes are hard and crisp into his teammates’ feet and that gives them that extra second to make their decision.

His shooting technique is clean, especially with the inside of his foot. He doesn’t use the laces enough and often tries to guide the ball home instead of putting his foot through the ball. He is very composed when taking his chances and has shown he can trick the keeper with different types of finishes on 1 v 1s.

Having been coached by Julian Nagelsmann, Baumgartner was on the receiving end of one of the most detailed and intelligent coaches in the world, especially when it comes to coaching attackers. Nagelsmann preaches fluidity and lots of movement in the final third and you can tell that hit home with Baumgartner. He is always looking for good spaces to be in around the eighteen-yard box and for runs to make inside the penalty area.

Watch here as Baumgartner makes a darting run into the area, realizes the pass isn’t on, but instead of staying offside, he creates another option for his teammate and it ends up in a goal.

He can be deployed as an 8, 10, a hybrid of both or even a false 9, he’s also even played left wing. Being incredibly versatile is another trait of a Nagelsmann player and Baumgartner can play all of those positions and play them well. He is very spatially aware and just has a good overall understanding of the game, so it shouldn’t be hard for him to adjust to a new style once he does eventually move on. His best fit however would be in a team that gives him the freedom to roam and get into areas where he can pass and move.

As you can probably tell, I am in love with this player, I think the sky’s the limit for the St Polten academy graduate. Staying at Hoffenheim for at least another year is his best option in my opinion. He can be their star man next season and show how good he is. He turns 21 in August so if he moves after next season he will still only be 22. Hoffenheim will be playing European football next season as well so we will get to see how Baumgartner fares playing 35-40 games in a season. I’m excited to see what Hoffenheim does in the transfer market to bring on players who complement Baumgartner’s style.

Also, many of the clips came from a great twitter user https://twitter.com/monzagadieu check him out!